The countdown is in full swing. “Diez, Nueve, Ocho”. The crowd screams out the last numbers with the presenters, begging for that for which they came to happen. “Siete, Seis, Cinco, Cuatro”. The espichadores follow the rhythm of the countdown with their hammers. Every blow hits the little nail on the head and drives it deeper into the wood. People push to the stage to be as close to the action as possible. “Tres, Dos, Uno”. A horn blows as the barrel is breached, pressurised brown liquid shooting out at high speed. The first row is drenched immediately, with little beer making its way into the raised beer mugs. Fran and I are a little behind the first rows, but fully in the splash zone. After initially missing us the espichadores swing the beer barrel back towards us, and we are drenched in brown beer. It’s in my hair, my eyes, my shirt and trousers, basically everywhere except in my mug. After the shower the crowd pushes closer to the espichadores to get their mugs filled with the heavenly liquid. Welcome to Villa General Belgrano, home of the Argentinian Fiesta Nacional de Cerveza, also known as the oktoberfest.

Last time I wrote about how we enjoyed our time on Tahiti and Easter Island, which is now already a month behind us. We’ve had quite a busy time since, visiting Santiago, Villarica, Pucón, San Martin de Los Andes, Bariloche, Cordoba, Villa General Belgrano, Mendoza, Valparaíso, Pisco Elqui and Copiapo. There is a lot to tell about these places, but for now I’d like to focus on one thing only: the golden/blond/red/brown/yellow/black colored alcoholic hoppy brew called beer.

One of the gift suggestions for our wedding was to enable us to sample beer in the countries we were going to visit. A big thank you to Anthe & Thomas, Lena, Borek, Karo, Tim, Laura & Vossa, Kristian & Lizzie and my cousin Nico!

Obviously 12 months is a very long time to remember all your beers, but it wouldn’t be the 21st century if there wasn’t an app for that. Untapped is an app that allows users to log in detail what beer has been consumed and what your opinion is. It’s database of beers is pretty impressive, it didn’t happen until recently that we had beers that were not in the app.

We have since departing dutifully sampled the local brews, which in some countries was much easier than others. Indonesia was quite poor in this respect, with mainstream beer Bintang the only one that we encountered on our travels. India and Vietnam surprised us in positive sense, with microbreweries in most cities we visited. Bangalore specifically brings back memories, albeit not so much for the brews. The venues suggested by Google and guide books as breweries were not so much breweries but rather clubs that happen to make some beer too. The crowds frequenting these places wouldn’t look out of place in London’s Clapham or Oxford Circus clubs, and we felt horribly under dressed. We skipped these and tried some places that were less known, including by the local tuk tuk drivers. One specific instance we asked to be driven to the biere club which the driver heard as the bengalore club. The latter sounds (and looked like) a certain type of gentleman’s club, and we were incredibly surprised when we stopped in front of it. Luckily the misunderstanding could be resolved easily, and our intended brewery happened to be in the same street. 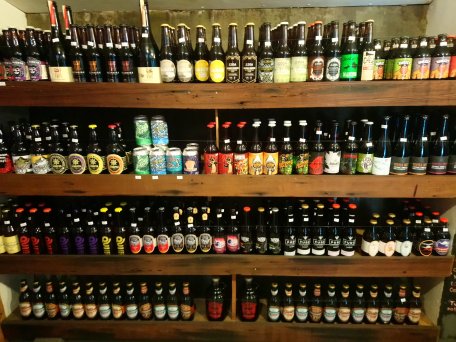 Going about Asia we managed to try 49 beers in 6 months, which sounds all right given we were sober for about 3 weeks in Nepal. Things really kicked off when we reached Tahiti though. For a small island it had a surprisingly large number of brews, and things went quickly downhill from there. Untapped works with a badge system, where drinking beers from different breweries and styles unlocks different badges. For example, drinking 5 beers with an alcohol percentage of less than 5% unlocks the badge “Riding Steady”. There is also one for brews from South America, dubbed “Amazon and Andes”. Every five beers you level up a badge. In just four weeks time I managed to reach level 10, or 50 unique beers from South America. 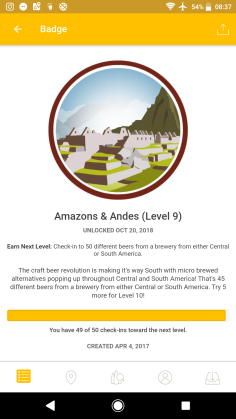 It would be natural to tell you my top three beers at this point, but unfortunately I can’t really do that. Many beers are very similar in taste to my poor taste buds. There is however one that does stand out: cerveceria Pehuen’s Cerveza Verde, or green beer. It’s a lager but brewed in such a way that it has a green color. The beer side of its taste was very smooth, the kind of beer that you would want after some hard work, while sitting in the garden in the afternoon sunshine with good friends or family, waiting for the barbecue to reach the right temperature. There was a certain freshness to the beer that I associated with iced green tea that made it so perfectly drinkable. Perhaps that is how they made their green beer, I didn’t have the opportunity to ask. I do still dream of the beer, and hope I get a chance to have another bottle of it.

The oktoberfest itself was very different from what I expected. Yes, it featured lots of German influences: dirndls and lederhosen, beer barrels, a specific kind of music, for example from a man called Willy Weimer. The village itself also looks decidedly German. But the oktoberfest itself has many more angles to it. I think that whilst it was originally perhaps a genuine oktoberfest its tradions have evolved to fit better with Argentinian heritage. The parades and music performances for example feature specific groups from all over Argentina celebrating their Spanish, Italian, German, Greek and Dutch roots, and even featured Scottish, Ukrainian and Irish groups. Since the “Day of the Race” is observed in Argentina they perhaps felt it was best to widen the remit of the festival. Furthermore, instead of serving one beer on long tables there are over 20 breweries from all over Argentina selling their beers, from big ones like Patagonia, Berlina and Fuchs to one man shops like Leyendal and Angels di Postal. There is one main stage with the audience sitting in chairs in an amphitheater like bowl, rather than long tables in a big tent. People can be seen lounging on the ground, on large cushions or palet furniture. The whole thing feels more like a small festival than an oktoberfest as I imagined it, but that made it no less fun! 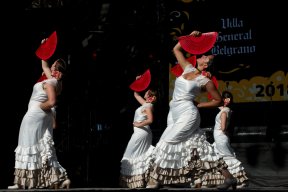 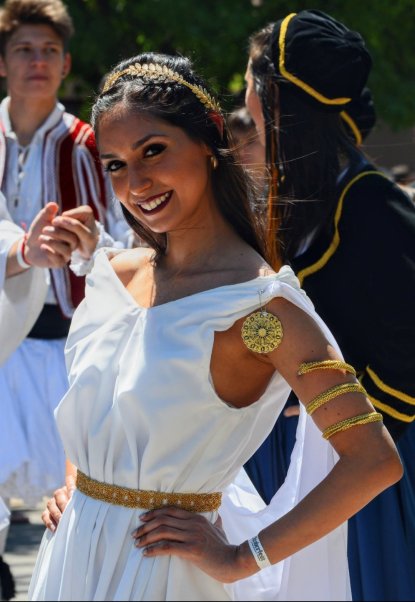 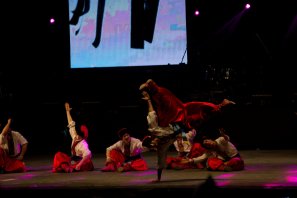 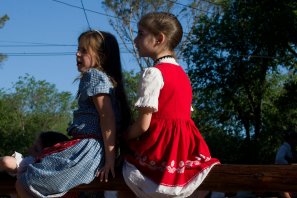 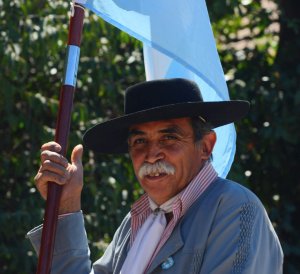 The oktoberfest remains a relatively local thing, with mainly Argentians attending. Over the course of three days we rarely encountered other foreigners. It is clear though the Argentinians like to party. The main musical events headlined at midnight, and there are at least two bands afterwards taking the official party to 3am easily. There must be more going on though, as I was woken up at 6.30AM on several days by boys and girls singing loudly, clearly heavily intoxicated from their beer tasting. Grandpa never lasted that long unfortunately.

The main event of any day however was the opening of the beer kegs, or espiche, by the aptly named epichadores. After having been driven through town on their cart the barrels are hoisted up on stage, where all participating groups are assembled. The audience makes their voices heard and shouts “espiche, espiche, espiche, piche piche” over and over again. After the last tap by the espichedores the beer gushes out, easily breaching the 20 meters to the first row of chairs. Anyone in range is drenched, an not everyone came prepared with clean clothes.

It’s a spectacular event to witness and experience, and I’m glad we did it. It will be up their with other beer experiences such as our beer pong battles on Koh Tao, and our Lao guide Eh inviting us to a small party with some friends after hiking. The Lao like to drink, as we learned. First a cup of rice beer served in a small cup meant for sharing, going round and round until the beer is empty. It’s rude to keep the cup for long so the rice beer is drank quite quickly. This is then washed down with two small cups of beer Lao, again from a shared glass, which again is rude to keep for long. Therefore, after drinking for a few hours and no food, we were both shattered. I managed to see the first goal of France Argentina, but woke up hours after the match finished with the TV still on. I later learned I missed a hell of a match….