Back in the 80s I was still living with my parents in the illustrious town of Zoetermeer. In that day the world was simpler, and even in the urban west of the Netherlands a boy could still look to the sky on a clear night and be in awe of all those points of light up above. My dad even took me to a local observatory in Rijswijk. It was a small telescope run by local volunteers on top of a 70s 10 storey high rise (UK friends: think a high council flat). It was enough to inspire me to study astronomy at Leiden university.

Studying in Leiden was a great experience, but unfortunately I had to admit that the particular skills required for professional astronomy were not well suited for me at that age, and my career took a very different path that would lead me to London, and Tahiti, in the end. I did have the opportunity to visit the Leiden Astronomical Observatory, one of the oldest in the world and a place where, in its day, ground breaking astronomical research was done by men like Kaiser, Lorentz and Oort. The telescopes there were a little bigger than the one in Rijswijk, but by this time in the early 20th century light pollution had increased materially, and, combined with the fickle Dutch weather, I barely ever took the time to visit. The old observatory is no longer used for professional mainstream research (at least to my knowledge), but the institute Leiden Observatory remains at the forefront of modern research in areas ranging from the evolution of the universe to astrochemistry, with leading scientists such as Ewine van Dishoeck, who was recently appointed to as President of the International Astronomical Union, and Tim de Zeeuw, Director General of the European Southern Observatory.

Fast forward to 2018, and on this trip we’ve seen a fair number of amazing skies. None however were as clear as here on Tahiti, far away from big cities and looking on the Southern hemisphere skies, which are somewhat more interesting than the Northern hemisphere is. I pointed out some interesting features to Fran before, but it was all by eye which never really paints as awesome a picture as binoculars or a telescope can. Cue the Société Astronomique de Tahiti (SAT, http://www.astrosurf.com/sat/club.html), which every Saturday organises viewing nights with their telescopes. They have a number of telescopes, but their pride is a SELF-BUILT massive 66cm Dobson optical telescope, complete on electrical wheels for easy movement. It was hooked up to a computer, where the software allowed automatic positioning and tracking of the telescope on a designated target. A tablet showed a rudimentary image of what the main lens had in it’s view.

It opened up the sky in a way I had not experienced in a long time, and it was very pleasant to be with them for a few hours. Lucky for us the sky was full with interesting objects such as planets (venus, Mars, jupiter, saturn, neptune and uranus) as well as galaxies, clouds and star clusters. We didn’t stick around for all of this, but got excellent views of the moon, the Butterfly star cluster and two globular clusters. For me personally though the most amazing view was of saturn. Just seeing this planet real time, actually live in my view, was exciting in a way that astronomy hasn’t excited me in a long time. I even managed to get a decent shot with the camera. 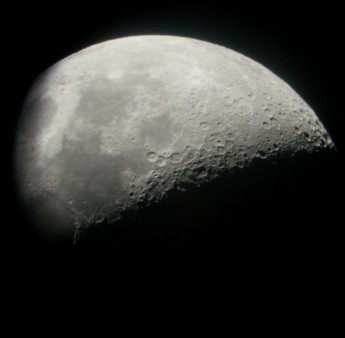 The volunteers of the SAT were all locals, and very dedicated to their club. They were happily surprised to see tourists in their midst, and even though their English and our French were lacking they were helpful in explaining how stuff worked, what they had, and who they were. In total there were about 30 people out, which I thought was a large group for such a small island, but looking to the sky above while we walked off I couldn’t help but think that a sky like that has to inspire the people living here. I wish we had the same skies in Holland..