After the horrible first week I finally managed to enjoy our trek. I had more energy and strength than before and could keep up with Franzi. It also meant I had time to look around. The next week or so we would remain above 4800m, with peaks at about 5500m at the Cho La and Renjo La passes, Gokyo Ri and Kala Patthar summits and Everest base camp.

After crossing the Kongma La pass and the Khumbu glacier (spoiler alert: doesn’t look like any glaciers I’ve seen before, it’s completely covered in rocks), we arrived at Lobuche (altitude 4900m). Lobuche, like many of the other villages we came through seems to consist of only trekker oriented tea houses and nothing else. A major difference was the presence of lots of other humans. In fact, there were so many of them that it was a little shock to the system, having so many loud conversations and not having the flexibility of picking any table or seat you’d like.

After speaking to some of them we learned they’re all either going to or returning from Everest base camp (EBC), the starting point of every Everest summit expedition. A very large majority of the visitors to the region go to EBC, primarily because it’s such a well known place. The irony is that you can’t actually see Everest from EBC! To us it made no sense why so many people came to the region with the sole purpose of reaching the tent camp, when there are far better places to go.

The next morning we went to Gorak Shep (altitude 5100m) before visiting EBC (altitude 5300m) ourselves. Both were easy hikes, not more than a few hours and we could tell we were better acclimatised than most, as we were faster on both flat and ascents. When we arrived ay EBC we found it quite empty, and Jambu explained that the Everest summit weather finally improved enough to allow ascents to the summit. A few hundred guests, sherpas and porters had left EBC for camps 1,2 and 3 to Everest summit, including Jambu’s brother. He would eventually reach the summit for the 4th time towards the end of our trip.

We spent the night in Gorak Shep, our highest altitude overnight stay. I had heard and read about the many small inconveniences that sleeping at high altitude can bring. Some people can’t sleep at all due to shortness of breath, or only in few hour stints. Others wake up every few hours to use the loo, as a byproduct of oxygen shortage is increased urine output. Finally, those that do sleep may get very odd dreams. Luckily neither of us suffered from either of this. We got much sleep, usually 8 hours or so between tucking in at around 8-9pm and getting up at 5am. Our daily rythem is very different here in Nepal than anywhere else.

The following morning we planned to go to Kala Patthar (altitude 5500m) for good views of Everest. The day started cloudy though, and the chances of good views were slim. I therefore decided to pass on this opportunity, since views on Everest would be even better at a later stop, allowing my poor old legs and knees some downtime. Franzi of course went up, and whilst the visibility was quite variable she did see Everest from up close. After that it was a short and uneventful walk of 4 hours to Dzongla (altitude 4800).

We’d only stay 1 night in Dzongla before crossing the Cho La pass, provided the weather permits it. The evening was a bit grim, low clowds and even a bit of snow. When we arrived at our lodge we were greeted by a fellow trekker who asked us whether we’d seen 5 other trekkers. One of the guides actually went out looking for some others. Together with Jambu’s stream of gossip, much of which included news of people gone missing when climbing to or returning from summits, hammered home just how dangerous the area can be.

The morning started promising and Jambu gave us the go ahead to cross the Cho La pass. The initial ascent was a 2hr walk to the end of the valley, after which there was a much steeper ascent to the pass. We worked hard to keep up with our guide and porter, with the former having enough breath to call the rest of Nepal while we struggled up, and the latter carrying 30kg extra and still being up faster than us if he wants to.

When we finally reached the pass the weather had taken a turn for the worst: lots of clowds rolling in and an occasional snow flake. Jambu wasn’t concerned though, the hard part was done and the descent on the other end, whilst steep, was doable in this weather and even if it would deteriorate. And deteriorate it would. We reached the village of Tangchan at 12, and after a break we would continue to Gokyo since we were feeling strong. Gokyo should also give us the best views of the Everest mountain range, and we were extra keen to get there as soon as possible. To get there we had to cross the Ngozumba glacier, by far the widest I’ve ever walked on. It was a good 2km wide, and it took us 1.5 hours to get to the other side and reach Gokyo. By that time it had started snowing heavily, and we felt it became more and more difficult to navigate. It was for these circumstances we took a guide on our trek. In his 12 year as Sherpa he has seen it all and been everywhere, so he took us in the right direction without issue. Later we heard several people were glad of seeing us in the distance, as none of them had guides to take them across the glacier, and they relied on our route to get across. In the end all of the groups that left Dzongla made it to Gokyo.

Overnight the skies cleared up and we left at 5am to go up to Gokyo Ri. It was only 700m straight up, which we did in about 2 hrs. From here the views on the Gokyo lakes and the Everest range were fantastic. Throughout the morning the lake’s colours changed from dark green to bright blue. Everest’s flank was visible, showing more of itself than ever before. It is very impressive to stand at 5.5km altitude and still having mountains tower above you for about 3km. Depressing also in some ways, an getting to this point is painful, let alone bridging the remaining gap. Not many people will ever go to the top. 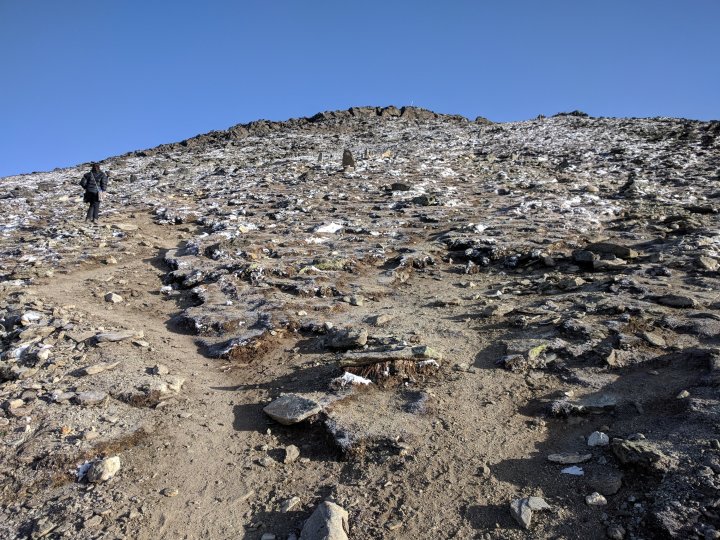 What is left after seeing these majestic mountains and beautiful lakes? Nothing other than returning to the real world. In a few uneventful days we walked back to civilization, with mixed weather. The one thing that stood out for me is the remergence of trees, grass, flowers and LIFE. I knew in the back of my mind how void of life the mountains are compared to lower altitudes, but coming back to it really lifted my spirits. It confirmed to me that I’m not a real mountain person: I like the view of them but don’t want to get up close. I like the good things in life, like pizza and beer. And on that bombshell I was ready to leave Nepal for warmer places. Next up: Thailand!